For the 21st time, here is the weekly report of what has happened in the VideoLAN community and VLC development, during the past week.

Last week started again with Felix committing, this time to port the CAOpenGLLayer to OS X.

The iOS AudioUnit output gain support for a correct mute implementation, and was moved to a modern Objective-C syntax.

The core gained stream_CustomNew(), to create custom streams; it also gained demux_New() and those 2 functions will be used for adaptive streaming, that need slave streams and demux.

The bluray module gained support for Blu-Ray ISO, through the new UDF implementation.

The HLS module now supports HLS discontinuities, which has been a pain to support for us, so far.
We've also added support for WebVTT and TTML in DASH.

The libass version was updated to 0.13.0 and this should remove the infamous "rebuilding font cache" on OS X and Windows Vista (and later). Anime fans will be happy

A Text-to-Speech subtitle renderer was added for Windows, like we did for OS X. It's useful for people with visual deficiencies, that can't read those subtitles very well. It's based on the SAPI 5.1 API.

DVBlast, the VideoLAN DVB server, had a 3.0 release.

This release is an important version, that was partially rewritten to use the libev library for the event loop.

The new features include PID and SID remapping and support for Deltacast ASI cards.

At the same time, multicat got a 2.1 release.

Tarballs are available now on the project page.

The most visible change of last week was a big interface speed up, in the video and audio lists and the thumbnailer, done by limiting the number of threads and removing some unneeded thread barriers.
We've also added an application-wide threadpool to help managing those threads.

libVLCjni was fixed to support and run correctly on Android 6.0. There is still work left to do for the new permissions model, but that will follow quite soon.

MobileVLCKit, the libVLC binding for iOS got support again for the VLCAudio class, including mute support.

There has been improvements on the snapshots events and methods.

The port to tvOS has also been worked on, notably by separating more cleanly the interface from the logic in the iOS apps, so we can have a different interface for tvOS.

The WinRT port got changes in the theme, and some colors should now be in your roaming settings.

One of the major crash in the Thumbnailer (start of the application) was fixed: it was due to a race condition when seeking to get the snapshot.

The Windows Indexer API is now used on the Windows 10 Mobile version, to get better search results.
We have more strings translated, and an update of the French translation.
Finally, the gestures are now correctly disabled in locked mode.

The releases 1.8.0 and 1.8.1 were pushed on the store, with all the fixes and features of this week and the previous week.

This week, quite a few changes happened to x264.

The largest changes were ARMv7 and ARMv8 optimizations, done by Martin and Janne, which total around 30 commits on the 40 commits pushed this week on x264.

Anton changed the predictors update and the the row VBV algorithms.

Finally, x264 also has received fixes for PowerPC on FreeBSD, and for the high bit depth lookahead cost compensation algorithm.

That's quite a lot for this week! See you next!

For the 20th time, here is the weekly report of what has happened in the VideoLAN community and VLC development, during the past week.

I'm surprised to have been keeping at it for already 5 months. It's a bit boring to do, and also a bit lonely, but I believe it is necessary so that everyone knows what's going on.

For once, we'll start with libVLC, and the new libVLC backend for EFL/Emotion. You can now use libVLC easily in an EFL or Elementary application!

Last week started with Felix fixing an open bug on the Lua extensions of VLC on OS X.

Then, we received a new audio output for the Tizen Operating System.
So far, it works quite fine on Tizen 2.3 but has extra features on 2.4. The audio/video synchronization is not yet complete, though.

The iOS OpenGL video output was improved to support OpenGL off the main-thread and multiple OpenGL contexts in a sharegroup (multi-thread OpenGL for the n00bs like me in OpenGL).

The libVLC port for tvOS was also improved, notably to correctly disable ARMv7 assembly, that cannot run on the Apple TV.

There were also changes to speed up subtitles sorting and fixes on TTML, WPL, adaptive streaming, and the videotoolbox module.

There was a 0.9.0 libbluray release on Saturday, that mostly added:

It should be integrated in the next major version of VLC.

The week was extremely busy on the WinRT side: we've had more than 140 commits in a week!

The commits were mostly to fix more of the 1.7.0 release issue, but also adding features:

Not much on Android, this week, just a couple of bugfixes.

Quite a few things happened on the Tizen port, and we have a basic application running well.
More on this in a later post, I believe

iOS received a few fixes for:

The tvOS port had a few changes, notably on the bitcode integration. More on this, a bit later, when we have something to show.

That's quite a bit for this week! See you next!

Because of the VideoLAN Dev Days that happened last week-end, here is a dual-week report of what has happened in the VideoLAN community and VLC development, during the past 2 weeks. :D

It explains also why there may not be as many commits as we usual have. This report is also shorter because I don't have enough time to detail as much as I'd like.

The VideoLAN Dev Days 2015 were a huge success, with numerous attendees and quite a few nice conferences.

I'll do a longer post about it, but here is a nice picture during one of our meetings! 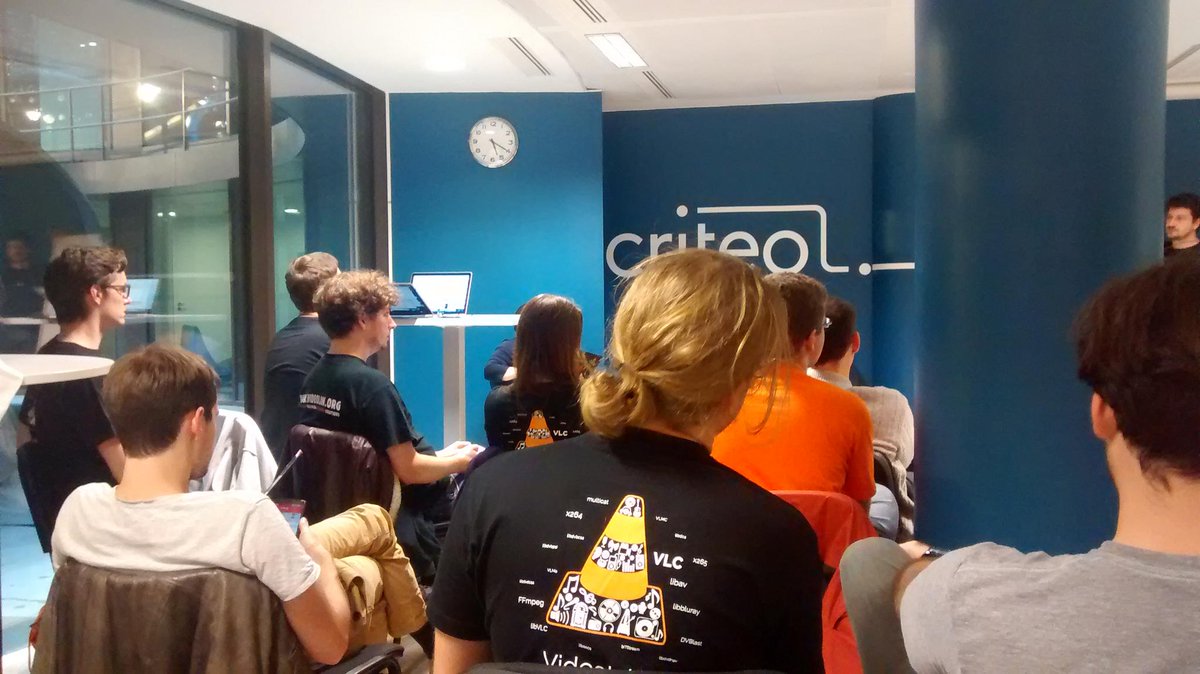 We've finally merge the work from outreachy on the TTML subtitles. Largely reworked by Hugo, this makes it supports most of the styles from the TTML specification.
We still need a bit of work to merge multiple styles.

François worked on the subtitles support for DASH and HLS, because we had quite a few issues with subtitles streaming input; be careful, it is not ready yet.

He also worked on lazy-loading of the playlists, mp4 seeking.

David found a work-around for AirPlay output that was stuttering, on OS X.

We've had large refactoring on the OS X interface, to continue the cleaning, that you've seen in the past weeks.

Rémi worked on the avcodec direct-rendering support, to always assume edge-emulation; and on simplifications of the hardware decoding setup in this module.

This work introduced 2 calls in the core: decoder_GetPicture() and picture_pool_Wait(). The first can be used instead of decoder_NewPicture() when the decoder manages correctly the format updates. The latter is a variant of picture_pool_Get() that sleeps until a picture is available.
This could be useful for the future asynchronous decoding feature...

The iOS port has been quite busy, starting by fixes for iOS 9.

The MediaLibraryKit project was updated for iOS 9 and for tvOS.

We've also had fixes for WatchOS, for iOS 9 searches, for the database indexing, and thumbnails.

We've also disabled the search if the folder is hidden behind a passcode, to avoid embarrassing results.

This is major WinRT release, adding the hardware decoding, changing a lot of the internal, and improving the interface to match Windows 10 look.

We've updated the projects to support both a Universal Windows Project and a Windows 8.1 project.

We've fixed a few bugs from this 1.7.0 release, notably crashes.

After the 1.5.90 release, things have been quiet on the Android front.

We've had translations updates, fixes for crashes, fixes for last playlist resuming, playlist&random states on resume and a few other small bugs.

Finally, yours truly fixed a very important bug, where we exported more than 14000 symbols in libvlcjni.so instead of 200. This will make the binary quite smaller and faster to load.

Here is the weekly report of what has happened in the VideoLAN community and VLC development, during the past week.

The week started with the addition of a long-asked feature in VLC: hotkeys to increase and decrease the size of the subtitles, without going to preferences or restarting VLC.

We then had several fixes for the Bluray support and mostly BD-J menus, that should now work correctly in VLC.

The skins2 module was fixed for some windows managers like Gnome 3 and Unity that could sometimes keep the taskbar above VLC.

The big mutex that we had for Android decoders and video output was removed by Thomas, after a big fight.

Thomas also modified the core loading of decoders and packetizers: we now always packetize. This is done in preparation of the asynchronous decoding that we'd like to merge inside VLC.

François rewrote some parts of the mp4 demuxer related to seeking to improve fragmented MP4 and adaptive streaming support.

Oh, and one more thing... we started to prepare VLC for tvOS.

This week was mostly a preparation for the next major release.

What we mostly did was fixing bugs, notably in audio playback, in cover art management, chapters display and in the bitmap cache.

We largely modified our Android Thumbnailer to fix regressions and support DVD thumbnails.

We also tweaked a bit the interface for advanced options and started to load asynchronously the images for the video list.

Finally we updated all the translations and pushed a version numbered 1.5.90 on the Play Store, in beta.

On iOS, we prepared and pushed the 2.6.5 release, fixing a couple of regressions, notably the handling of the vlc:// protocol.

We also fixed a few bugs for this next version.

Finally, some code to build VLCKit for the new tvOS was merged.
It's very early though, but we have video playback!

Last week was a calm week, mostly on the UI side, for WinRT.

We've spent our week fixing regressions and issue in the thumbnailer, in the video output and fixing crashes.

No new feature, for once

That's all for this week! See you next! Have fun!